A recent ruling in the Washington Supreme Court on punitive damages has maritime attorneys watching for fallout.  The Court found punitive damages are recoverable by a seaman on an unseaworthiness claim when the employer was “reckless” or “malicious.”  While we find the case to poorly reasoned, we can expect plaintiff’s lawyers to jump on the bandwagon and try to assert such claims in other jurisdictions.

In March 2017, the Washington Supreme Court held in Tabingo v. American Triumph LLC that seamen can bring a punitive damages claim for a vessel’s unseaworthiness.  The Court split with the widely-followed Fifth Circuit case, McBride v. Estis Well Services, LLC, 768 F.3d 382 (5th Cir. 2014).  What rendered the ship unseaworthy in Tabingo, you ask?  The plaintiff, a deckhand trainee, lost two fingers when he was pushing fish through a hatch on the deck.  Another employee began closing the hatch, and when he realized plaintiff’s hands were in danger he tried to correct his mistake – but, unfortunately, the hatch’s hydraulic control handle was broken.  The plaintiff alleged his employer knew about the broken handle for two years but had done nothing.  The Tabingo Court found this conduct could “fall into the realm of reckless or malicious behavior.”

A little background is necessary to understand the significance of the ruling.  For about twenty years, punitive damages were unavailable under general maritime law.  This made Jones Act employers (vessel owner employers) relatively safe from punishingly high damage awards.  Indeed, once upon a time, the United States Supreme Court announced a goal to create a uniform and consistent body of maritime law, exemplified by their decision in Miles v. Apex Marine, 498 U.S. 19 (1990).   Miles established punitive damages were not available under general maritime law.

However, in 2009, the Supreme Court turned Miles (and its attempts at uniformity) on its head in Atlantic Sounding v. Townsend, 557 U.S. 404 (2009).  In Atlantic Sounding, the Court changed course and found punitive damages were available for maintenance and cure claims.  This decision was limited, however, to claims where an employer willfully refused to pay maintenance and cure.  Since 2009 we have seen in our practice a steady uptick in plaintiffs’ lawyers seeking punitive damages for routine failure to pay maintenance and cure claims.  In short, punitive claims have been on the rise in Jones Act seamen’s claims, but it will remain to be seen what impact the Tabingo case will have, if any, beyond Washington State.

We can expect to see plaintiffs lawyers seeking punitive damages on unseaworthiness claims.  In Tabingo, the Court found the plaintiffs were entitled to seek punitive damages for their unseaworthiness claims, and in doing so rejected the established precedent of the Fifth Circuit’s decision in McBride, which firmly denied the availability of punitive damages for unseaworthiness.  Rather, the Tabingo Court ventured to explain that “punitive damages would punish [the employer], serve as an example for other ship owners, and maintain the law’s historical treatment of seamen as special wards of admiralty.”  In other words, the Tabingo court would have seamen enjoy all Jones Act remedies, as well as expansive general maritime law remedies, because seamen need more protections.  However, we just do not know if other courts will find such claims to be recoverable.

Most important to employers – Tabingo’s lack of precedential value to courts outside of Washington state may not stop plaintiffs from citing the case and making claims for punitive damages for unseaworthiness.  This could be bad for employers of seamen because unseaworthiness is a type of strict liability.  That is, an unseaworthiness claim does not require a plaintiff to prove negligence.

As maritime defense attorneys like Burke Harvey, we do not want to see courts allowing plaintiffs to claim punitive damages for such liability without fault claims as unseaworthiness.  This is one issue we will be closely following. 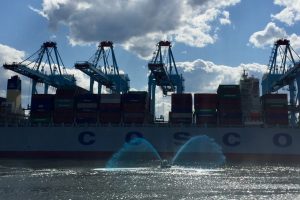 The largest container vessel to call on the East Coast[...]