Ventker Henderson lawyers Marissa Henderson and Jeanne Noonan enjoyed a tour of the Enviva Terminal along the Southern Branch of the Elizabeth River, Chesapeake, in November with the Future Leaders program of the Virginia Maritime Association (VMA).  Operator Host Terminal provided informational tours, explaining that the terminal exports wood pellets overseas for use as fuel, particularly to the United Kingdom. The pellets come via truck from plants in North Carolina and Virginia.  The terminal, which is a repurposed cement terminal, now can receive, store, and load over three million tons of woody biomass for export each year.  The pellets are stored in two huge domes, then transported via conveyor belt to break bulk vessels.  Thanks also to Crofton Industries for providing vessel transportation to and from the terminal, allowing the group to view the working waterfront of the Southern Branch. 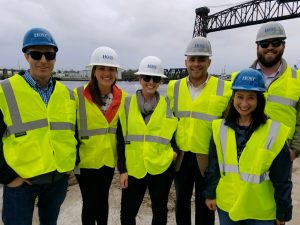 Firm lawyers and other VMA Future Leader members ready for a tour! 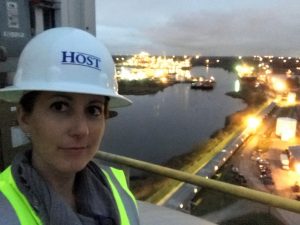 Ms. Noonan made it to the top of the dome! 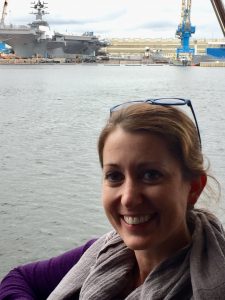 Jeanne Noonan on the Southern Branch 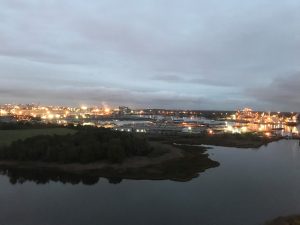 Nice view from the top of the dome