The Wave of the Future: Vessels Controlled By a Joystick

Once upon a time, there were ships with a captain and a crew sailing the ocean blue. Will this be how future generations remember that vessels were once manned? Are automated vessels really an innovation of tomorrow instead of something in the far-distant future?

There is much current discussion concerning automated vessels in the shipping industry. But where actually are we in this development? And who are the players? Here we hope to highlight some of the key players, the progress, and the varying points of view surrounding autonomous vessels.

In 2016, Kongsberg Gruppe, a maritime technology-firm based out of Norway, and Yara, a Norwegian fertilizer manufacturer, combined forces to build the world’s first autonomous and fully-electric vessel. Named the YARA Birkeland, the vessel is scheduled for manned operation later this year, then will transition to remote handling by 2019, and then complete autonomous functioning by 2020. It will run a short sea shipping route carrying fertilizer from plant to port some 16 miles away. 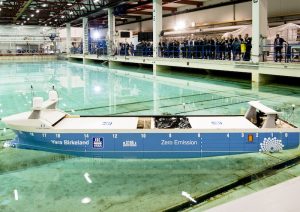 Kongsberg Gruppe has also partnered up with the UK’s Automated Ships Ltd to build a fully automated vessel, the Hronn, for offshore operations. In 2017, the Hronn was constructed in a Norwegian shipyard, which is also known for building the world’s first battery driven electric car ferry. Norway has even opened a test area, Trondheim fjord, along the Norwegian Sea for autonomous vessels, where vessels like the Hronn are tested. Designed to service offshore energy and offshore fish-farming industries, the intention is that it should be up and running later this year.

Rolls-Royce is also a major player in the quest for autonomous vessels. Rolls-Royce has staked its claim in the autonomous revolution with its leadership in the major research and development project, the Advanced Autonomous Waterborne Applications project. 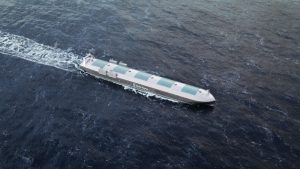 China refuses to be left out of the autonomous vessel revolution. In June of 2017, the Unmanned Cargo Ship Development Alliance was formed in Shanghai with Rolls-Royce being a member. The American Bureau of Shipping (ABS), a member of the above-referenced alliance, together with China, plans to develop an autonomous cargo ship by the end of 2021.

The involvement of these countries begs the question-Where is the United States Navy in this autonomous revolution? In 2016, the Pentagon research group, Defense Advanced Research Projects Agency (DARPA), developed an autonomous vessel, the Sea Hunter. Though originally designed to be a “submarine-hunter,” the Sea Hunter is surpassing the military’s expectations. Now in the hands of the Office of Naval Research (ONR), the goal is for the Sea Hunter is to be deployed by the U.S. Navy for months at a time. 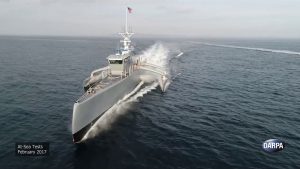 Outfitted with radar and an international ship-tracking system, the 132-foot autonomous vessel could be armed for conflicts abroad. The Sea Hunter will undergo testing of its abilities over the next two years. Though we have yet to see how the Sea Hunter will perform, it is clear that the Navy is prepared to compete with the rest of the world with autonomous vessels.

Shipping organization Wilhelmsen Group has announced a partnership with Kongsberg to launch Massterly, an autonomous-shipping venture. With YARA Birkeland as their example, Massterly hopes to complete a vessel by 2019 with fully autonomous operation by 2020. Using new land-based control centers in Norway, Massterly plans to combine Kongsberg’s technological expertise with Wilhelmsen’s logistics experience. As far as future aspirations, there is even a UK-based group that hopes to have a solar-powered autonomous research vessel transit the Atlantic in 2019. In other words, the next two years could prove monumental for advancement of the technology of autonomous vessels.

What’s your Point of View?

But with all the talk and discussion of progress, opinions vary on whether autonomous vessels are a beneficial innovation for the maritime industry. From a cost perspective, the YARA Birkeland, though having a capacity of only 100-150 shipping containers, costs $25 million, which is almost three times the cost of a conventional ship its same size. Yet the operational savings are anticipated to be up to 90% with the elimination of crew and reduced fuel costs. For example, the YARA Birkeland’s purpose is to move fertilizer from Yara’s factory to ports about 16 miles away, thereby replacing 40,000 diesel truck routes per year on the road and eliminating the pollution that goes with those truck moves. This raises another concern: The trucking industry may find unemployment rates skyrocket due to autonomous vessels. With an unmanned vessel also comes potential of unemployed mariners as well. Adam Minter in Bloomberg’s article Autonomous Ships Will be Great, recognizes that even the United States Coast Guard estimates that human error is the reason for 96% of all marine casualties.

Though opinions on the value of autonomous vessels vary from a social justice or financial perspective, there will be a transition time for everyone in the shipping industry should autonomous vessels take off. gCaptain’s editorial piece Ship Automation Without Consultation-The Problem With Robot Ships, describes the transition as: “A time when international law and treaties will have to be completely reviewed and rewritten. A time when the oceans will see a mix of automated and manned ships. A time when employment in the poorest countries will be considered and debated.” Many segments of the industry are in preparation mode already. According to Minter in his opinion article featured in gCaptain, Lloyd’s Register, “the 250-year-old ship-classification group has issued guidance for crewless operations.” Though many mariners are pushing back and some such as Maersk’s CEO are doubtful of the “efficiency,” the trend appears to be towards at least some segments of shipping employing autonomous vessels.

The developed world’s populations have quickly adapted to their lives being manipulated, enhanced, or dependent upon a screen or app, such as an IPhone, or even UBER. Technology also transforms every way in which we do business around the world, and now shipping may be in for major shifts due to autonomous vessel technology. As Minter goes on to say in gCaptain, the reality for the shipping industry is that the phrase “all hands on deck” will mean all “fingers on a keyboard or a joystick.” As we are potentially on the brink of fully autonomous vessels, we as maritime lawyers must ready ourselves for possible changes in maritime and admiralty law. Though mainstream change to automated vessels will likely be slow in coming, automated vessels, are to some degree, coming whether we like it or not.